How to Add Your Users and Staff to Portal365

Learn how to add your NGO users, employees, and staff to Portal365

Written by Omar Masari
Updated over a week ago

Adding your NGO users to Portal365 consists of two steps:

Portal365 system has many levels of accessibility, because in every NGO, there's some kind of hierarchy that gives each staff member a set of responsibilities and tasks that he/she can operates in without interfering with others responsibilities or tasks.

These levels can be determined by a set of roles that can be given to that user, for example:

Each role can each be given to the users based on their actual work titles in the NGO.

The main role in Portal365 is the Admin role. It has the full access to the system and by default, is giving to the account creator. With this role, the user can create new roles and assign them to employees.

If you are the creator of the account or you have the Admin role, then click on the organization's name or logo in the top right of the page. 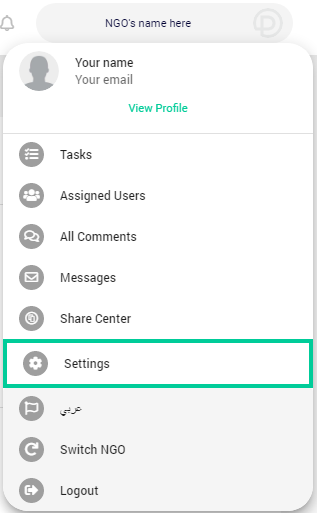 After clicking on it, a page will show up like this

The Roles page will appear and it'll show the roles list in your NGO's account. If you haven't created any roles yet, then the only role will be Admin

To add a new role click on Add Role and a window will popup in which you can fill the name of the role and the description of it (e.g. NGO Director: Manages everything related to the organization)
After you fill that, click on Save.

After clicking Save, you will notice that a the new role has been added to the role table.
Add other roles that you think your users will need while using the system.
Here is a table of roles after adding three new roles: 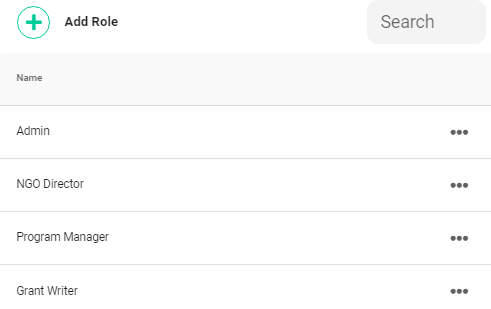 Adding new roles with their descriptions will help you and the other admins know what this role should allow the user to do, but these roles need to specify what permissions each of them can have. That's why you should specify the permissions for each role.

To manage a role's permissions, click on the role you want to give permissions to for example Grant Writer and a the permissions page will appear 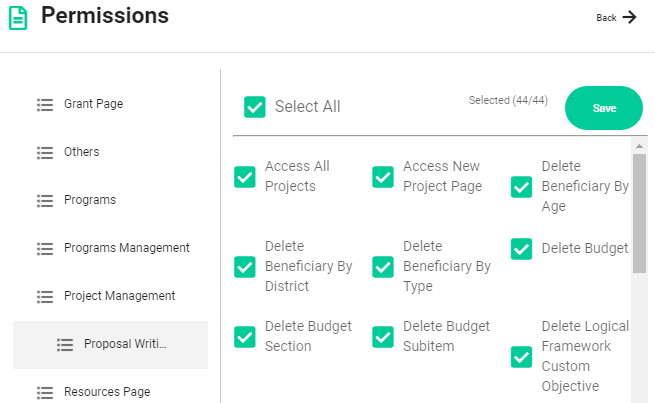 In this page, you can check and uncheck any permission for each role, but it's recommended that you check the permissions that the role represents.

For example, for the Grant Writer role, the permissions are preferred to be within the proposal writing and grant page permissions.

After specifying the permissions for the role click on Save so you can save these changes you have made.

Adding the users and assigning roles to them

After specifying the users roles in your NGO account and their permissions, now it's time to add users and assign these roles to them based on the work they'll be doing on the system.

To add a new user, go to the settings again and then click on Users management.

After clicking on it, the User management page will show up, and a table of current users will be there so you can see the current users for your system; if there's no one else using the system, then it'll have just one name in the table.

To add new user click on Add User. A popup will show up, and there you can type the following: 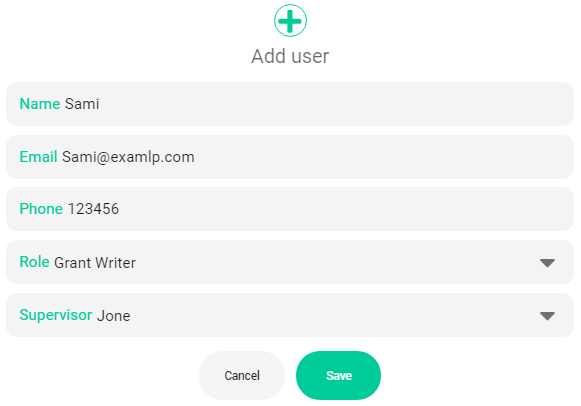 Note: When clicking Save, an invitation will be sent to the user email and from there, the user can click on the link and create a new password so he/she can access the system afterwards. 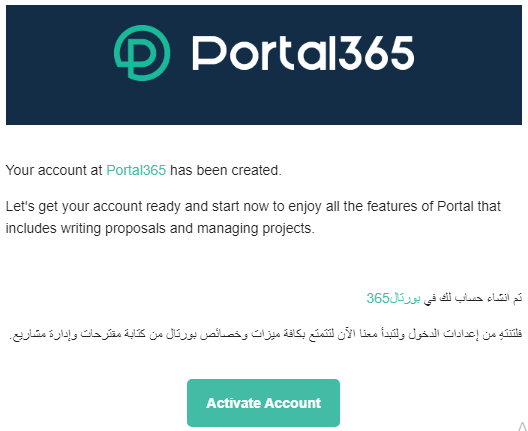 When clicking on Activate Account, a new page will show up requiring the user to create a password as follows: 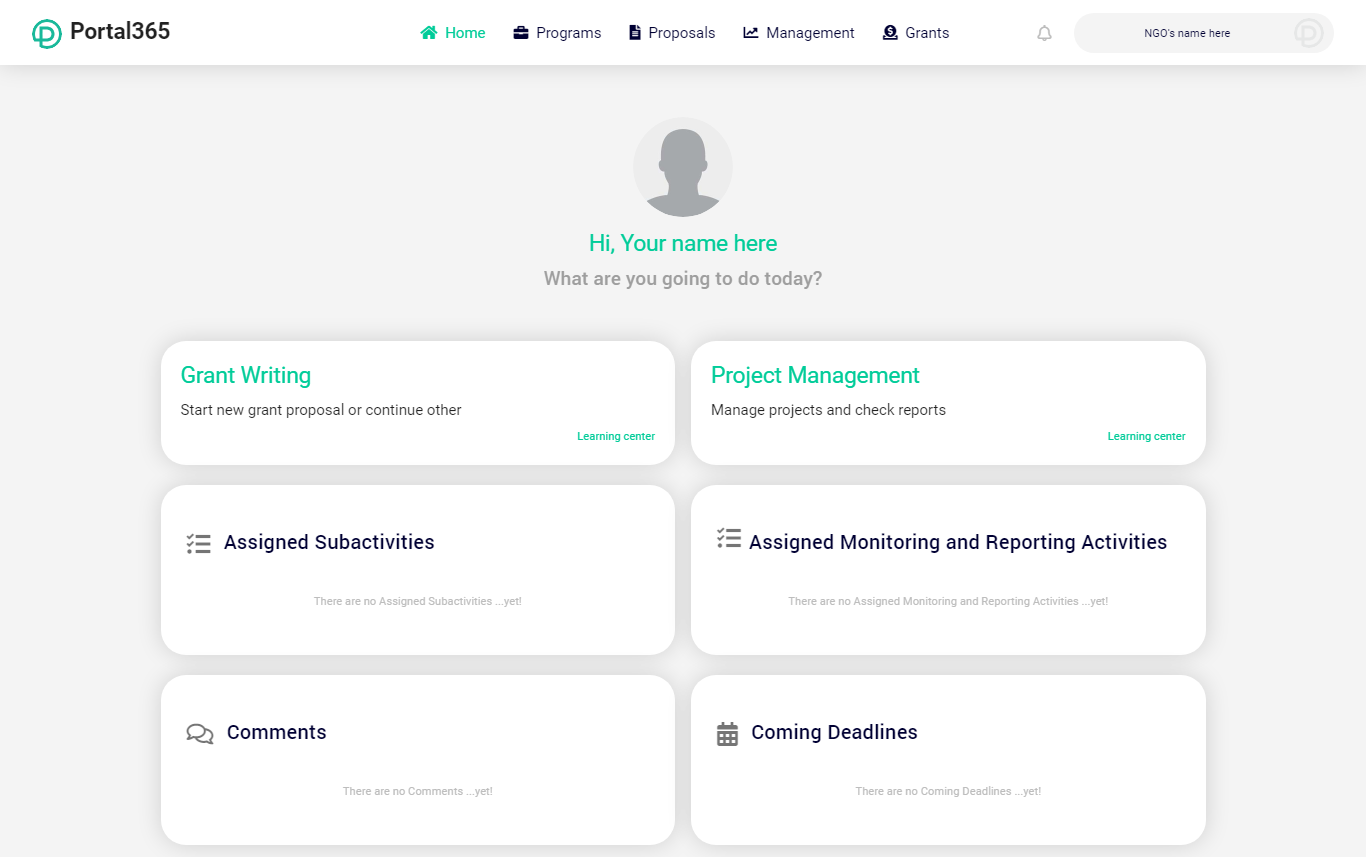 In order for the user to login again after logging out, the user can go to Sign in page and enter his/her data as follows: 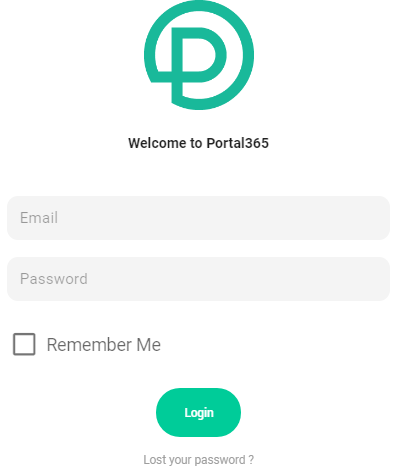 Previous: How to Edit Your NGO Account Preferences in Portal365?
Next: What Are Raw Data and How to Add Them?